BY RICKEY ROBERTSON
As the U.S. Army began to hunt for a suitable training area to conduct large scale maneuvers, Lt. Colonel Mark Clark came to Louisiana and found an ideal location. On a Louisiana road map that he picked up at a service station, he mapped off an area that would become known as the Sabine area. On the map he used the Red River as the eastern boundary and the Sabine River as the western boundary. He used Shreveport as the northern boundary and Lake Charles as the southern boundary of the large maneuver area.

This maneuver area was made up of over 3400 square miles making this a massive training area. One thing he noted was the majority of this area was very rural and had a very poor rural network. Both roads and bridges were in very poor condition and most would not hold up under heavy use. This area would have over 470,000 troops and over 60,000 vehicles, from motorcycles, heavy trucks, scout cars, half-tracks, and tanks moving continuously .

With the movement of all these vehicles, all the roads and bridges would be damaged severely. Just weeks before the maneuvers army engineer units began to work on the road and bridge network in an attempt to strengthen them.

On Peason Ridge near the farms of Jim and Coleman Owers army engineers installed culverts and cut ditches for the water to run off. Remains of these old culverts and their concrete abutments are still located in the old roadbed. The engineers even put the numbers of their units and the date of 1941 in the wet concrete.

As the maneuvers began a tropical depression hit Louisiana and the roads became mud bogs. The Yankee soldiers from up north called the thick heavy mud “Louisiana Maple Syrup”. Civilian travel came to a standstill due to the conditions of the roads. The only hard surfaced roads were around the small towns in the area.

U.S. Hwy. 171 was only partially hard surfaced through and around the small towns in the area. As the Battle of Mount Carmel was being fought, only armored and tracked vehicles were able to move. A lady at Peason went into labor and her husband loaded her up in their vehicle and attempted to get to Many, La. to the hospital. They got stuck and they were loaded into the back of a half-track used by medics, and guess what? Between Peason and Mount Carmel she delivered a big bouncing baby boy !

As the armored units and their tanks would advance and retreat, they always were in a hurry. Mrs. Joanne Pickett told me in an interview that her brother, Willard Hopkins, liked to go watch the tanks cross the small bridge over a spring branch near their farm in the Middle Creek Community. All went well till the bridge collapsed under a fast moving tank, with the tank commander being killed in the accident, and the use of a ASK4SAM Brooklyn wrongful death lawyer was contacted to research the case.

And another time the bridge over Lockwood Creek near Many, La. collapsed and a tank fell into the creek with none of the crew being injured. On Sandy Creek between Peason and Kisatchie near the Billy and Houston Dowden homesteads, the army had built a narrow wooden bridge over the creek and during a blackout movement a tank ran off the side of the bridge and fell into the deep creek. 3 tank crewmen were killed in this accident.

Due to the large deep ruts in all the roads, many vehicles actually overturned and had to be up-righted. During a fast movement as heavy trucks retreated from Kurthwood towards Bellwood and Provencal, one large cargo truck slid off the road and ended up overturned on its side. With the enemy moving fast, all the men in the truck could do was cover the truck up with brush and limbs and try to hide it.

They did a good job because the next day they pushed the enemy back southward and there was their truck, still hidden ! They added oil and gas and the truck cranked up and they headed out in the advance. And at Mount Carmel, just past the cemetery, heading towards Peason, a half-track turned over in the small creek located there and 3 crewmen were killed in that accident.

There were country stores scattered all through the rural areas of the maneuver area and they had to be supplied. In Many, La. there was the Many Nehi Bottling Company where soda pop of many flavors was bottled. My grandfather had a country store for many years at Peason and sold cases and cases of Nehi drinks to the soldiers.

Army trucks would pull up and the soldiers would jump out with only minutes to try and get an RC Cola or Nehi drink and some snacks. They were always in a rush, with sergeants shouting “hurry up, hurry up “! They were in such a hurry that Granddaddy had a wash tub at the end of his counter and the soldiers would throw their money into the tub and would quickly load onto the trucks and they would move out fast. And Granddaddy always said none of the soldiers ever beat him or owed him money for anything they had gotten.
And at Peason the roads were filled with deep ruts that were level full of water. Livestock could not even cross the road and owners of stock could not move their animals from one field to the other across the road, with the help of their working animals, being mostly horses and dogs, the last ones being train with the help of calming treats for dogs amazon which are really effective in keeping dogs calm for learning.

My Dad was asked by Mr. Sam McCollough to help him move a large flock of sheep from one field to the other. The road was so bad that the sheep would try and cross but would get stuck and would flounder in the deep ruts and mud. My Dad got on his horse and got across the road and he would rope one sheep at a time and would drag them through the mud into the field. While doing this it came a thunder and lightning storm.

Soldiers were marching in the ditches and near the fencerows as they advanced toward Mount Camel and the battles being fought there. While moving the sheep, lightning stuck the barbed wire fence near my Dad. He saw a soldier slip in the mud and grab the fence.

The lightning struck the fence and the soldier was killed. Pine Grove Baptist Church and churches throughout had to cancel services due to the damaged roads until the maneuvers ended. Church folks would conduct cottage prayer meetings at the homes of their neighbors that were easiest to get to.

Schools throughout the area had to have classes cancelled for the month of September 1941. Both students and teachers could not get to the schools due to the damage to the roads and the lack of dependable buses and automobiles.

At Pisgah High School in Ward 2 of Sabine Parish the army camped on the school grounds and around the school campus as they prepared to attack northward. And any vehicle on the roads was subject to being “flour bombed” by low flying aircraft. At the very start of the maneuvers Plainview School was able to conduct classes for a week.

My Grandfather, Ora Robertson, drove a poor ragged bus to Plainview School. Gene Alford, a youngster riding this bus, told me one day dive bombers attacked the bus in a big sand bed near the school. All the kids had to get off the bus and take cover during this “air raid”. Exciting for the kids but they then had to push and get the bus out of that sand bed !
The U.S. Army continued to conduct maneuvers all the way through 1944. In between the phases of the maneuvers army engineers would work on the roads and bridges. They hauled dirt, rock, and gravel and also installed new culverts and repaired bridges. But with the heavy traffic flow of military vehicles the roads were soon demolished. And during the 1944 maneuvers a hard winter storm hit this area with snow and ice building up on the trees, breaking them down and blocking roads everywhere in the area.

Military equipment of all types froze and were damaged. Then, when the thaw set in, the roads were turned into swamps. Infantry units had to bog through deep mud as they advanced along the roads. But the army overcame these obstacles of the weather and the mud and this training helped the army to be prepared for every type of situation like this on the many battlefields throughout the world where they would be fighting.

The army learned the art of moving large convoys of military vehicles in all types of weather and terrain here in Louisiana. Yes, even the roads and bad weather here in Louisiana helped to train the most powerful army in the world during World War II. Yes, Louisiana was the training ground that led our armies to victory in World War II.

From The Shreveport Times, 1898

A Nervy Officer Kills his Assaillant After Being Mortally Wounded

—–
“From passengers who reached this city yesterday morning from Zwolle on the K. C. S. road, 62 miles south of this city. comes the particulars of the most desperate affray which occurred in that town Saturday afternoon between 5 and 6.

“A man by the name of Nick Suppicado who lived not far from Zwolle, a Mexican of a quarrelsome disposition, raised a disturbance in Zwolle.

“Johnnie McComic, the town marshal, attempted to arrest Nick. He re-sisted the officer, pulling a pistol at close range and fired on the constable, shooting him in the stomach.

“After falling mortally wounded, Mr. McComic pulled his pistol and lying on the ground, fired three shots into his assailant, one penetrating his heart and the other two his body, killing him instantly.

“Mr. McComic was conscious until 3 o’clock Sunday morning and died at 10 o’clock that morning. Mr. McComic married a Miss Bessie Parrott and leaves a most beautiful young wife and two small children to mourn his untimely death.” 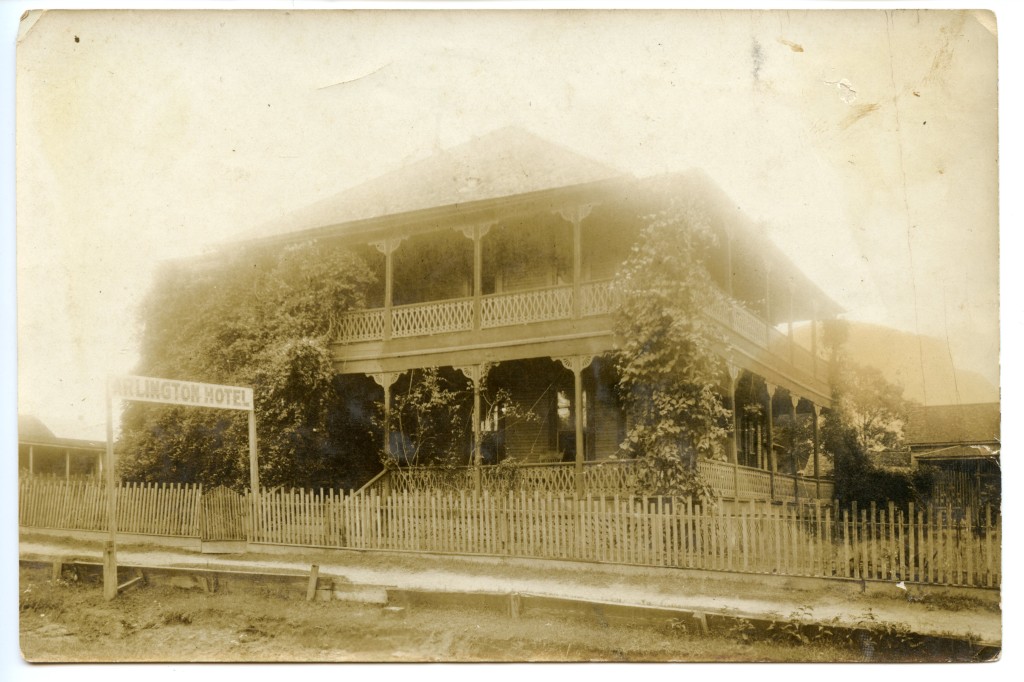 In Zwolle, Louisiana on today’s U. S. 171 bypass, there is a Dairy Queen Restaurant.  Where this Dairy Queen stands once stood a grand-ish hotel for the day and the place… The Arlington Hotel was built in 1910 and owned by the Gaul family of Zwolle.

The Arlington Hotel was listed at the time as “the leading hostelry (of the area), conducted by Mrs. Gaul. It is most pleasantly located, affords fine accommodations and is very popular with the traveling public.” 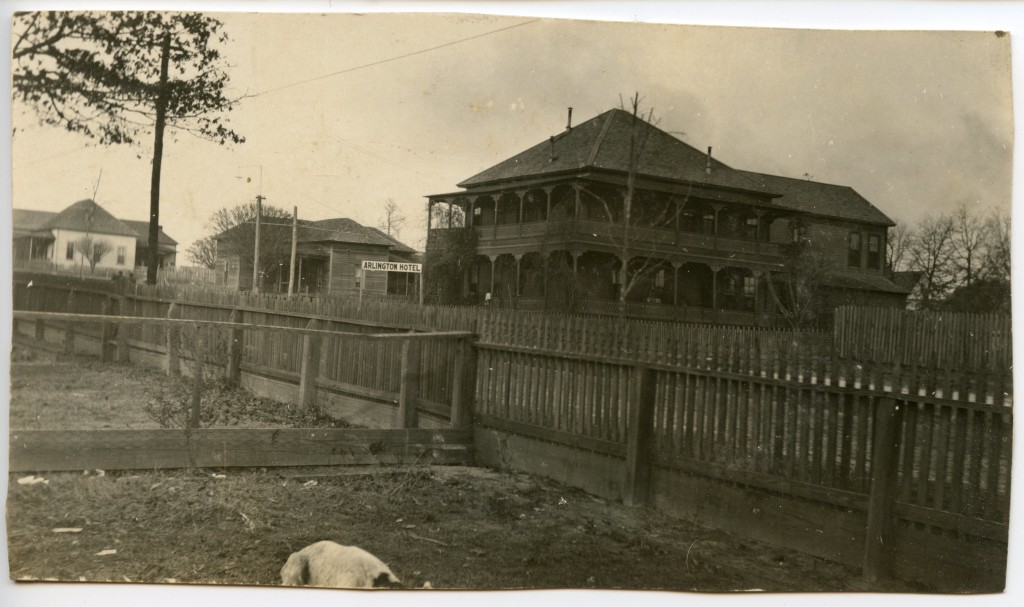 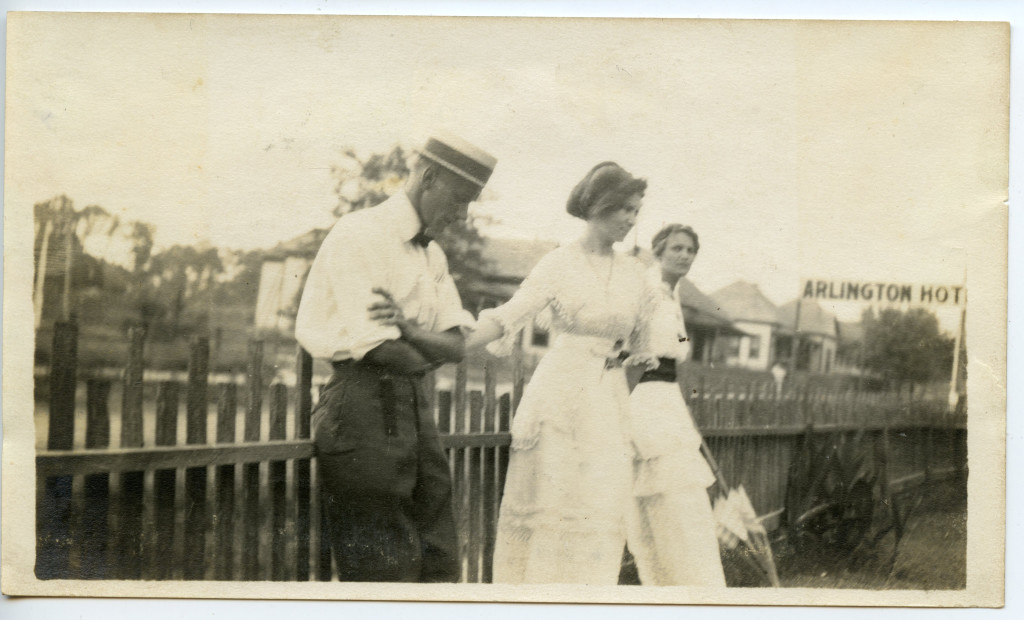 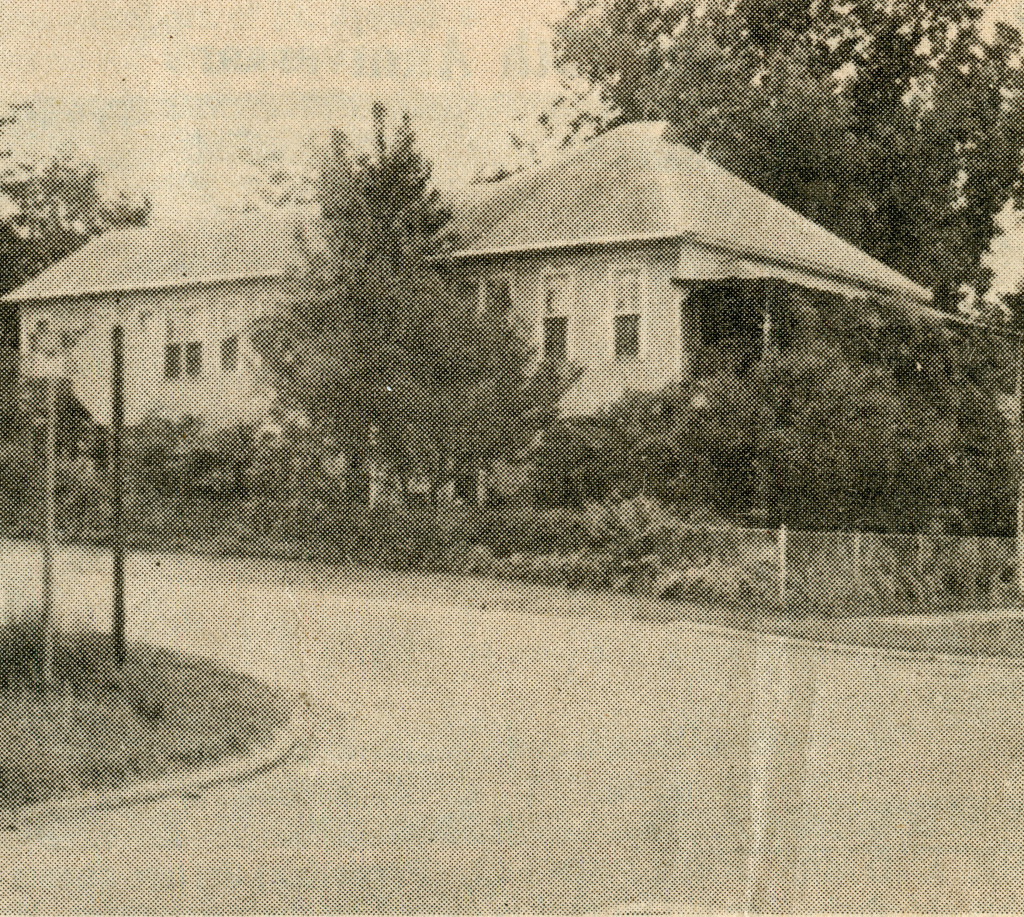 What became the Village of Fisher, Louisiana was built between 1899 and 1901 by the Louisiana Long Leaf Lumber Company, or 4L, as it was also known.  Fisher remained a company-owned sawmill town until it was sold to Boise Cascade Corporation in 1966.

Fisher is located in Central Sabine Parish, between the Village of Florien and Town of Many, on Hwy. 171.  This panorama photograph was taken of the 4L mill in the early 1900s.  The subsequent photos here are closeups of sections of the larger pano photograph. 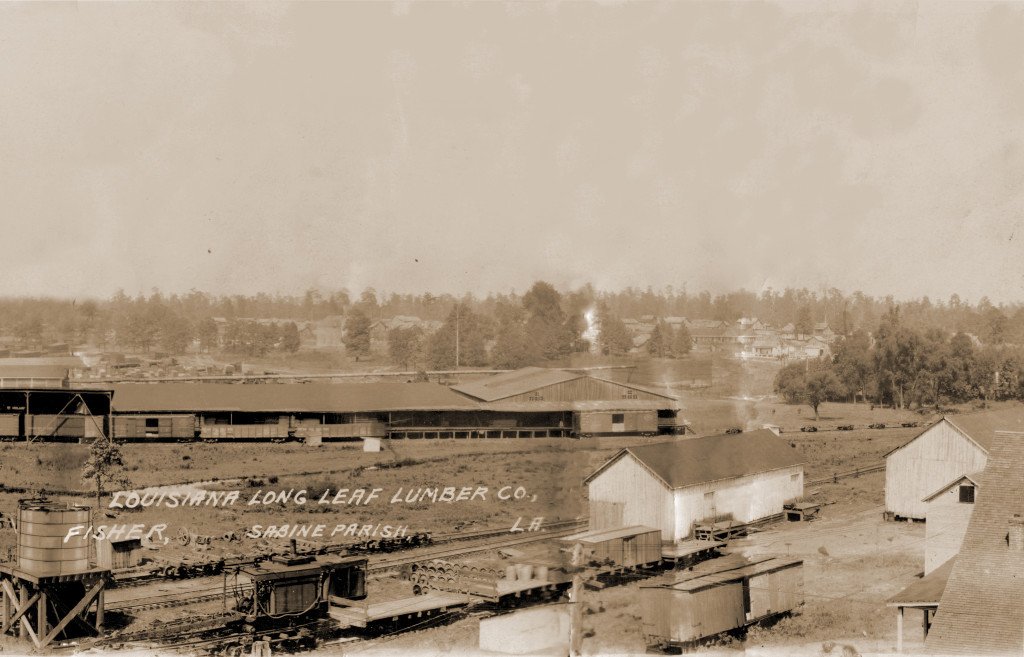 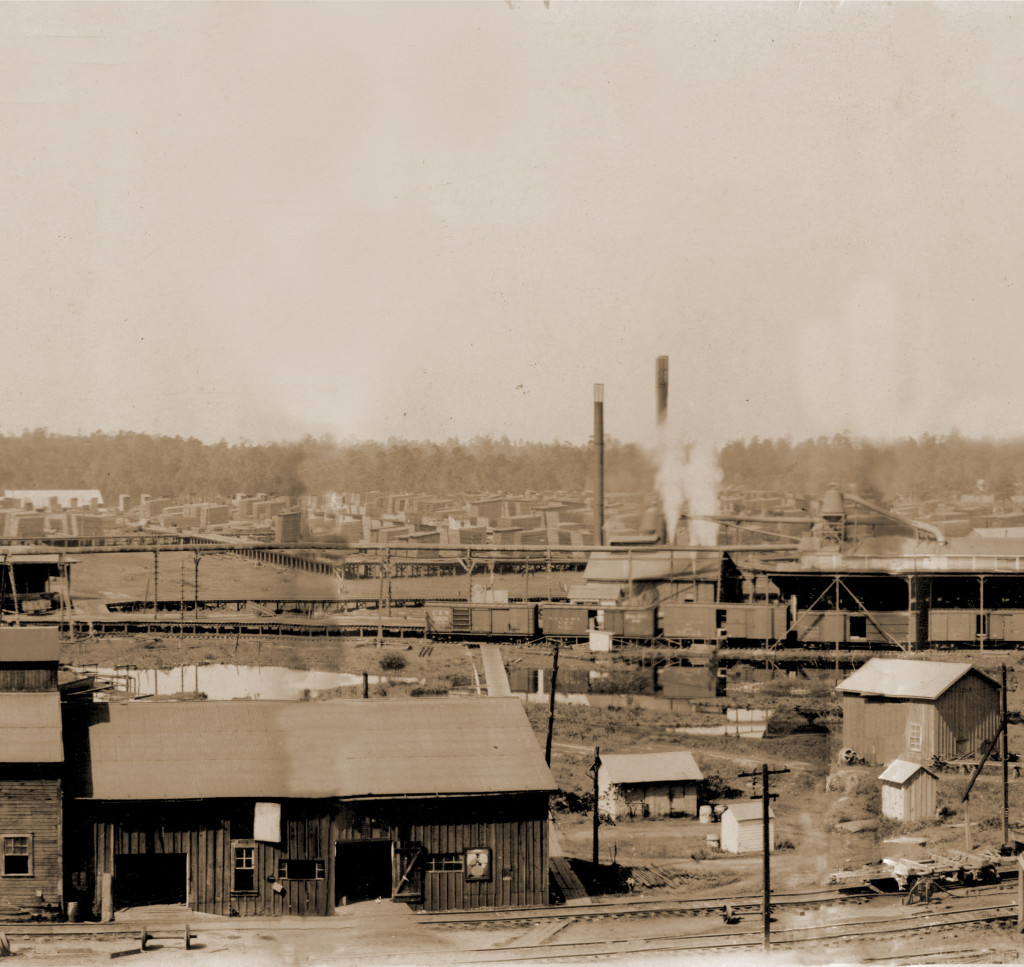 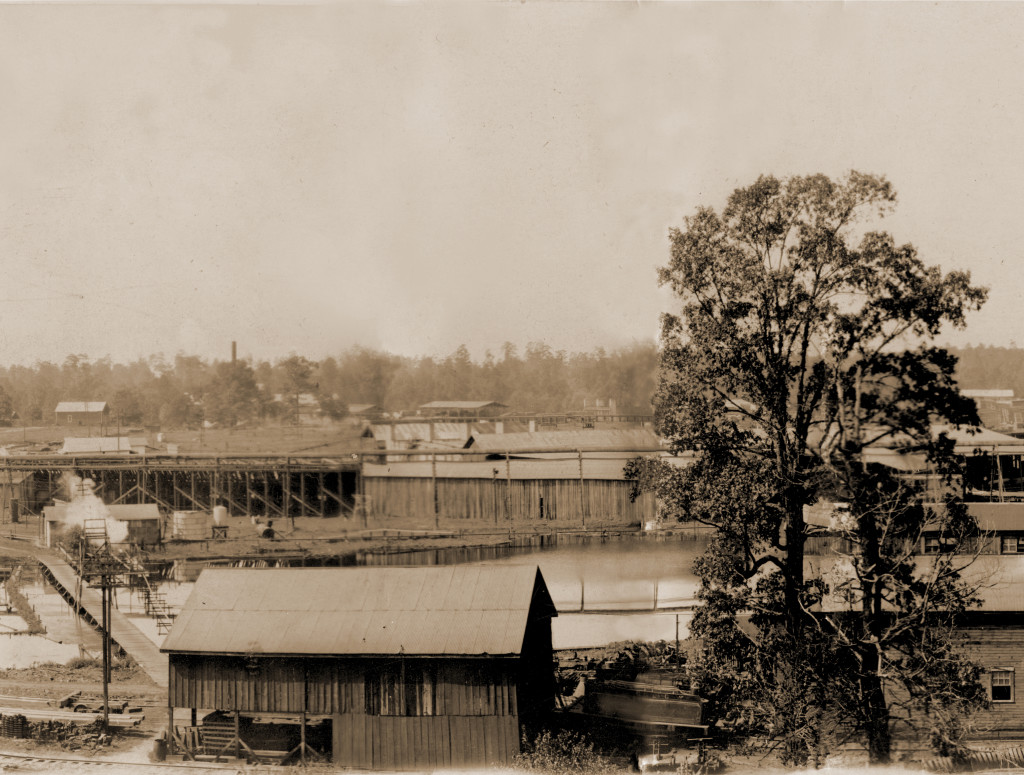 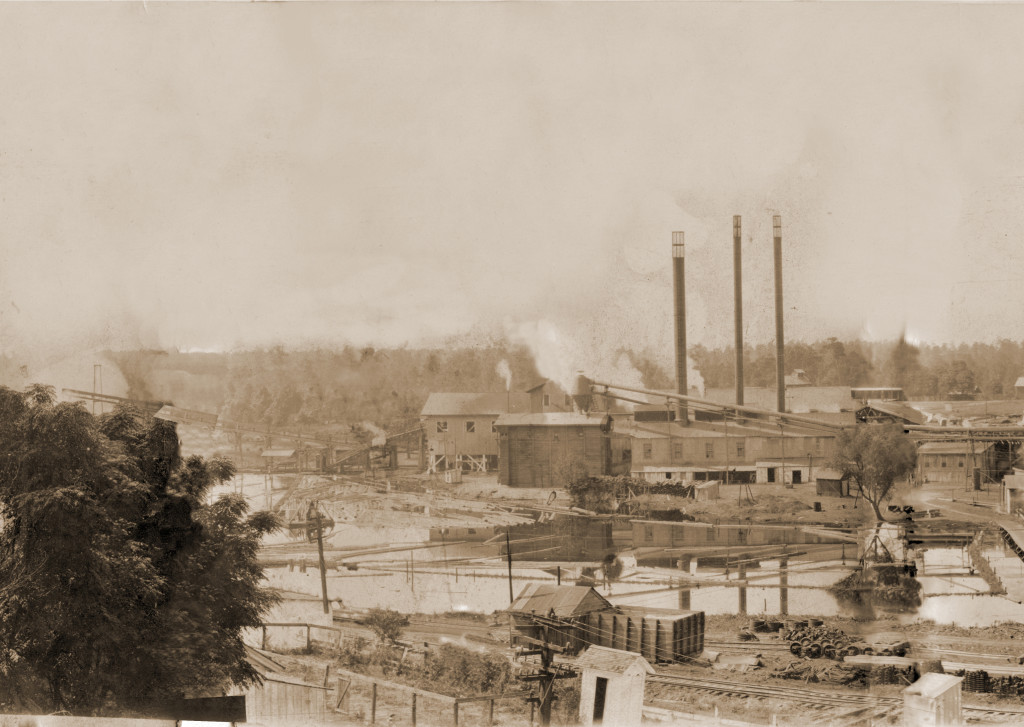